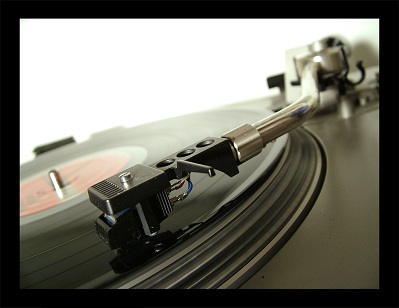 A DJ (or disc jockey) is a person who plays various pieces of pre recorded musical sounds for the listening enjoyment of an audience. The art of DJing has excelled to include the skill of playing, mixing, adding effects and organizing different musical sounds into one expressive form. Some modern DJs even add a bit of their own composition to a musical mix giving it an original flavour. Thus, a DJ can be thought of as a conductor, a composer and a musical programmer.

A typical mixing DJ will play a collection of songs or tracks. The collection is termed a set or mix. Each song will be mixed into the next to give the appearance of a seamless stream of music. The idea is to provide a coherent transition between tracks so that the audience cannot determine when one track ends and the next begins. The music should flow smoothly between tracks and add to or influence the mood of the audience. A DJ is an entertainer. It is their job to invoke energy within an audience and provide musical entertainment for an event. DJ can also provide visual entertainment as the audience watches the hand motions of the DJ when making a mix. This is a highly under rated component of DJing and may be considered a crucial factor in allowing a DJ to attain stardom.

Most DJs have the ability to manipulate their tracks in such a way as they are able create remixes of songs and even create new pieces of music by using elements of their tracks. By adding effects and adjusting various elements of a piece of music, the DJ can alter the sound. When combined with similar actions on various tracks of music, the DJ is able to "glue" tracks together and produce a composition that is a combination of selected sounds from each track. It is important to note that this process could easily be done prior to a performance so that the DJ could just play a pre-recorded set of music. The dynamic factor of a live DJ is that their choice of music is directly affected by the current state of the audience. A pre-recorded set may not suit the mood of the audience and a good DJ will alter their musical choices depending on the audience's reaction and mood. Thus, it is important for the DJ to mix music in a current frame rather than a past frame. Also, part of the excitement of going to see a DJ is to watch how the DJ puts his/her mix together. Watching the motions of the DJ during the performance can be almost as exciting as listening to the music being played. Turntablist DJs are especially exciting to watch as their hand movements are fast and complex. They can essentially create new music from very small snippets of pre-recorded sounds. Their records rarely consist of full songs but rather minimalist beats, portions of melodies and vocal samples used to create whole songs.

DJs do more than play sound recordings. Today's DJ must be a combination of performer, music lover, composer, conversationalist, equipment manager, and businessperson.