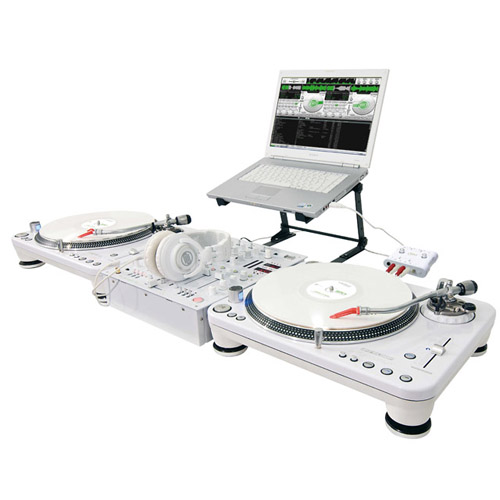 A digital vinyl system (DVS) enables the DJ to physically manipulate the playback of a digital audio file on computer, using a standard analogue turntable or CD deck as an interface. DVS setups retain the traditional hands-on feel of real vinyl whilst allowing the playback of digital tracks that are not available in vinyl format. They allow the DJ to scratch and perform other turntablist tricks that would not be possible with a conventional keyboard or mouse.

DVS systems use special timecoded vinyl or CD control disks. The audio output from the timecode disk is then routed to an analogue to digital audio interface (usually supplied with the software package), which then sends a digital timecode signal to the software. The software then translates the signal into corresponding changes in the position and playback speed of a digital audio file. Audio output from the software is then routed back through the DAC or computer soundcard and then to a standard DJ mixer where it can be mixed in the same way as any other analogue audio signal.

The length of delay between the reading of the timecode signal and the software audio playback is a measure of performance of a digital vinyl system. This delay is usually in the range of 6 to 30 milliseconds.
The most popular DVS packages on the market now are Serato Scratch Live and Traktor Scratch Pro (from Native Instruments).
Interestingly, there has been some controversy as to who actually invented the digital vinyl concept. The first commercially available digital vinyl system was FinalScratch for the BeOS. This was developed in 1997 to 1998 by a small Amsterdam-based company called N2IT, with input from Richie Hawtin and John Aquaviva. After a legal dispute, Native Instruments now license the technology from N2IT, who are the patent holders.
In a rather bizarre twist to this story, RZA from Wu Tang clan has claimed in an interview with KotoriMag.com that it was actually he who invented digital vinyl technology, the year before N2IT, using technology from NASA and millions of dollars of his own money…
From 2011 it has been announced that the DMC World DJ Championships will allow the use of Serato Scratch Live as well as traditional vinyl.

The following are the famous DVS available in the market.