Don't: Grope
There are many acceptable ways to meet a girl. Grabbing her ass isn't one of them. And no, grabbing her breasts isn't the answer, either. How'd you like it if some girl just walked up to you and grabbed your crotch? Never mind.

Do: Tip bartenders generously
It's good karma. Tip well enough, especially in the early rounds, and they'll take care of you for the rest of the night.

Don't: Barf in the champagne bucket
I've seen it. It's not pretty. And I don't care how much you paid for bottle service: VIP doesn't stand for Very Impressive Puke.

Do: Your homework
Before you leave your apartment, find out what kind of club you're going to. You'll know how to dress, how much you'll spend, and how to set expectations for your friends.

Don't: Sleep
When you're passed out on the leather banquette, it's time to go home.

Do: Use a wingman 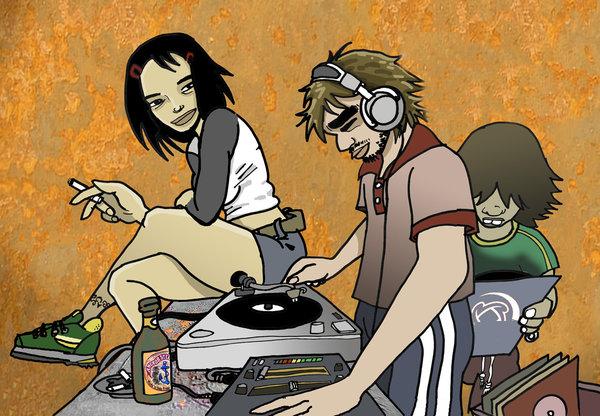 Don't: Use the word "wingman"

Do: Bathe
Go ahead: rock the grunge. Skip shaving. Wear your faux-designer t-shirt. Look like Shaggy from Scooby Doo. Fine. But please, do us all a favor. Shower. And go the extra mile and put on deodorant. Smelly isn't sexy.

Do: The booty dance
But not all the time. And not when you're the only one on the dance floor.

Don't: Request a song from the DJ
It's disrespectful. And pointless. If your song is hot, chances are he'll play it anyway. If he already played it and you missed it, tough. There's no reason to play it again. If he wasn't going to play it in the first place, then it doesn't fit in the vibe of the party.

Don't: Drink and Dance
If you're highly coordinated and highly sober, give it a shot. But all too often, dancing with cosmo-in-hand will result in spilled drinks and sticky skin.

Do: Get a little freaky
We're not puritans. Hey. If both the guy and the girl are into it, go for it. A little tongue never hurt anyone.

Don't: Get a lot freaky
When you're dry-humping against a wall, it's time to think about a change of scenery. Like a hotel room. Or a bathroom stall: nothing says romance like a toilet.

Do: Order any drink you want

Don't: Order an apple martini
How do you know it's over? When Sex and the City is on TBS.

Do: Hit the clubs that pull celebrities

Don't: Ask them for autographs

Do: Ask a girl to dance
It's courteous, direct, and old-school. She might even say yes.

Don't: "Blind Back Humping"
At the time, it might seem sneaky and clever. But approaching a girl from behind, slipping your hands around her waist, and then awkwardly bumping your body against her ass is not the way into her heart. Or her pants.

Don't: High-five when you get them

Do: Wash your hands after taking a leak.
You know who you are. According to Hollywood bathroom attendants, over 50% of guys don't wash their hands. Why? Is a dollar-tip just too steep a price for personal hygiene? Ladies, think about this. Half the guys who are trying to dance with you--half!--are touching your bodies with urine-stained hands. Good times.

Don't: Go postal on the bouncer
This makes for grand entertainment for everyone else, but you're never going to get in. He's doing his job.

Do: Talk to your friends

Don't: Scream in their ears
If you don't like the loud music, don't stay. No one likes to be screamed at. And no one likes the accompanying spit.

Don't: Ask the photographer for a picture
If he's not taking a picture of you, it's for a good reason.

Don't: Be a Sidewalk Pimp
You've seen the Sidewalk Pimp. He's the guy who struck out all night. He's piss-drunk. At four in the morning, he's standing on the sidewalk by the club, wobbling, and making his last desperate moves. He's literally clawing at the girls who leave the club. Don't be that guy.

Do: Use your phone, sparingly, to coordinate with friends

Don't: Pretend to talk on your cell phone
If you see a guy next to the speaker with a finger in his ear, he's having a fake conversation because he can't find his friends. Or doesn't have any friends.

Do: Bottle service
Even if you can't afford it, at some point give it a shot. Split five ways, it's not as pricey as you might expect. And a large bottle of Grey Goose goes a long way.

Don't: Be a club snob
We've all been there. We're having fun. The DJ's hot. The crowd is hotter. And for one evening, we forget about the hell that is our normal life. But then we talk to the Club Snob, who says, "This place isn't awful, I suppose, but it's no_________." Talk about a buzz-kill.

Do: Be a club snob
It keeps us in business.

Do: Go to the bar to get more drinks

Don't: Elbow your way to the front of the line
Those ten people in front of you, all vying for the bartender's attention. They're not standing there for the hell of it. Wait your turn.

Do: Remember her name
We feel you. It's tough. Rita,Riya, Shriya, Michelle, Rachel, —they all blend together. But you lose monster points when you forget her name. Or worse: when you call her by the wrong name. If you're ever stuck in this situation, introduce her to one of your friends. Like this: "Hey, you should meet my friend Eric." Normally, she'll follow up with, "Hi, I'm ____"

Do: Talk to strangers

Don't: Be a "Marathon Creep"
They target their prey early on. Then they follow their victim for the rest of the night, but only from afar. The Marathon Creep's only attempt at social contact is to appear mysteriously beside the prey to make it look as though they're dancing with them.

Don't: Say "What do you do?" immediately after meeting someone.
Girls. It's not so subtle. This translates to: "So how much do you make? What kind of car do you drive? And how much can I expect you to spend on me?"