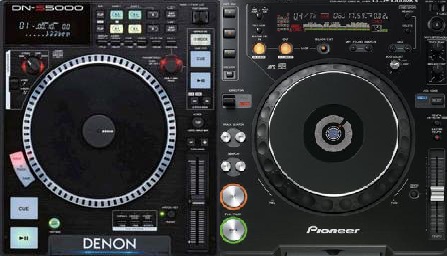 The CD (Compact Disc) Player is currently the main method a DJ has of accessing digital audio. In order to qualify as a valid CD player for the purpose of DJing, the unit must provide a pitch control that gives the DJ the ability to speed up or slow down the tempo and pitch of a CD. This is to insure that a DJ can beatmatch two tracks so that they can be mixed properly. Without this feature, it would be impossible to make coherently smooth mixes of tracks.


There are many manufacturers of DJ CD Players.Key features in a CD unit consist of:

As the turntable maintains popularity within DJ circles, the manufactures of CD players are constantly trying to create a CD player that emulates the turntable. Common features found on most turntables have been ported to the CD domain in the hopes of causing a migration towards CD units. Thus we see features such as instant starts, enabling the digital music to be played instantly with the push of a button. This is a one dimensional binary task whose states are started and stopped. Pitch Bending equates to the ability of pushing records forwards to speed them up and applying pressure on a record to slow it down. This is useful when two tracks are running at the same BPM (beats per minute) but are not in phase (see beatmatching for more information). This is a one dimensional continuous task whose options consist of speeding up or slowing down a track. Unlike a record, CD players do no play a track backwards when pitch bending. It is a seperate opertation from scratching (described below). To pitch bend a track, the DJ would use a special dial on the CD player. Turning the dial in a clockwise motion would speed the music up while turning it in a counter-clockwise motion would slow the music down.

When using vinyl, one can read the grooves in a track to anticipate what will happen in a track. This feature is not maintained in the CD version of this artform and instead, CD can provide accurate information on the time remaining and consumed for each track. This can be useful determining when new tracks need to be mixed in as older ones are close to finishing. DJs, however, are not able to see the upcoming breaks and builds in their tracks and so they must memorize the outline of tracks.

In moving to the digital realm, the CD player can offer some features that a turntable cannot. On-the-fly looping can be performed by setting cue points throughout a track and having the CD unit loop between two cue points to create a seemless beat. On a turntable this would equate to playing a piece of music, lifting the needle and starting it again on the same place. Turntablist DJs create seemless loops with records by using two copies of the same track. When one section of music is played, they cue up the same section on another turntable. When the first section finshes, they cut the output over to the second section and resume play as if the track has looped. This involves two turntables and two copies of the same track. The same effect can be acheived with one CD player, one copy of a CD track and a looping feature. Also, assigning cue points within a track provides the ability to jump to certain sections of a track, effectivly creating a remix of the track. Creating cue points within a track is one dimensional binary task that involves simply labeling a time within a track with a cue point. Each unit of time within a track either has a cue point or does not.

In an attempt to provide the one unique feature of a turntable, DJ CD players now come equipt with the ability to "scratch" a CD. On a turntable, the vinyl record can be pushed and pulled back and forth under a needle causing a unique sound known as a scratch. The sound of a scratch is affected by the groove, the needle and the sound sample that is contained within the groove. CD players that offer this feature use a dial, often labelled a scratch pad, where the DJ can create a digital scratch by moving the dial back and forth, much like a record. It differs in two ways. The first is that, the sound produced differs from the analog sound of a vinyl record being scratched. The buffering mechanism involved in a CD scratch must resample the section of track very often and very quickly in order to keep up with the movement of the dial. The sound of the physical needle rubbing along the physical vinyl groove is also not present in the digital version of the effect. The second way in which scratching a CD differs from a vinyl record is the haptic interface associated with each unit. On a CD player, the scratch pad dial is often no bigger than a CD itself. A vinyl record is typically 12 inches providing a much larger surface to handle. One benefit to CD scratching is the lack of skipping that occurs over the turntable method. When scratching a vinyl record, worn needles will often skip out of the groove while a CD player will almost never skip when being scratched. Scratching on either a turntable or a CD player is a one dimensional continuous action where the track either plays forwards or backwards at various speeds.